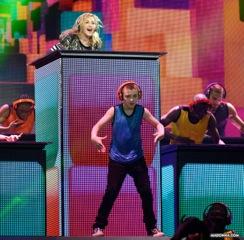 On Saturday night, Mark and I headed way uptown to Yankee Stadium, in the pouring rain, following a rare tornado outbreak to see Madonna. You see, we bought tickets to her show on Valentine’s Day not thinking too much about the venue. After all, how fun would it be to see Madge play Yankee Stadium? It was a fabulous idea at the time, but Mother Nature put an enormous dent in our evening as I watched the black billowing storm roll across the Hudson River and into Manhattan.

I had read in some recent reviews that Madonna had kept her fans waiting for over two hours. The tickets said the show would start at 8 p.m. rain or shine. I decided that we would hang out at the apartment, keep an eye on the weather and make a last minute decision on whether or not to go. That was a smart call. We arrived at the stadium at 9:30 and she finally took the stage around 10:30 p.m. I was taught that being late is the height of arrogance. It says to others that your time is more valuable than theirs. I agree.

Not only had we been left in the rain under a tornado watch but she was two and a half hours late hitting the stage to boot! Luckily, I hadn’t bought seats on the field, where hundreds of drenched fans stood in the rain during her performance. We had very expensive seats that we actually never sat in. Instead, we stood back under the overhang and watched the show.

I am a huge Madonna fan but I was really disappointed in this show. It was full of the typical theatrics, amazing dancers, political statements and ethnic drummer circle/singer folks. While she sang some of her classic hits, they were all remixed and a little on the dark side. Although, she did surprise the crowd when she broke into Holiday and sang it like she recorded it years ago. The sopping wet crowd went nuts, me included. But for me, that was really the highlight.

Regardless of her arrogance and disregard for keeping time, Madonna is a true performer. The show went on under insane conditions and not once did she miss a beat. Neither did her dancers or singers. Even her dancer who appeared to be spineless in a deep backbend while walking down a set of stairs during the show never once showed any signs that anything was wrong.

But, here is the kicker. We left before the show ended!

In a crystal clear moment, I knew that I was done with Madonna for the evening. No matter how much we had spent or how long we had waited for her to start the show. No matter how curious I was to see her drop her pants to show us her faux Obama tattoo. No matter how cool it was that her son Rocco danced on stage with her. I knew in my bones that I would rather be in my pajamas, curled up in my comfy bed instead of standing behind the seat where I was supposed to be sitting…while it poured rain.