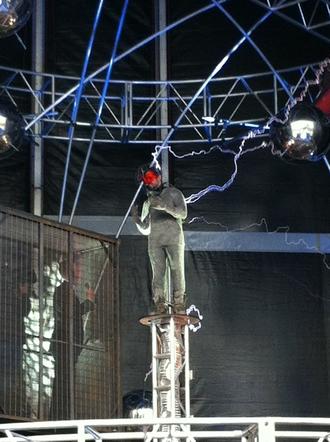 As a child, I was taught that you do not mess around with electricity. One year around Christmas time, I had my own personal experience with the power of electricity as I checked the lights for the tree. In case you are unaware of this fact, you should not let your finger touch the prongs on the plug! It was enough of a shock to get my attention; I’ve never made that same mistake again.

So, when I read recently about David Blaine’s latest stunt involving one million volts of electricity I was instantly taken back to the moment in the garage when I lit myself up like a tree. Blaine is famous for his many death-defying stunts. He has suspended himself over the River Thames in London for 44 days with only water. He has been buried alive for seven days. He has even frozen himself in a block of ice. As of Monday night, Blaine has also stood in the middle of an electrical storm as one million volts of electricity were being shot his way.To say Blaine is a thrill seeker would be an understatement.

Corbin and I met Blaine the weekend before his stunt, Electrified: One Million Volts Always On. My friend, Denise Albert, invited us to come along as she and her boys went downtown to Blaine’s office. Denise worked with Blaine for many years, producing several of his biggest events. As you can imagine, the boys were beyond excited.

Blaine showed the boys some photos of what he was working on. Corbin asked, “why are you electrocuting yourself”? Blaine explained that he was “electrifying” himself and not “electrocuting” himself. There is in fact a HUGE difference between the two. In one you die, with the other, you don’t die! I did my best to explain this to Corbin.

Corbin tried on the glove of the Faraday suit that Blaine wore during the stunt. The suit was an adaptation of a Faraday cage which basically protected Blaine from the electrical field around him. The chain-like suit looked like something a really cool and hip knight would wear during battle. Before we left, the boys checked out Blaine’s pet alligator in the office. Yes, a pet alligator! Seems Blaine makes living on the edge a professional and personal matter. He also did a few card tricks with the boys that even left me wondering, “How’d he do that?”

On Sunday, Corbin saw Blaine being electrified at Pier 54 along the Hudson River. It was a cold and rainy day. Not an ideal day to be electrified if you ask me. It was also really, really loud. So loud, that everyone was given ear plugs before walking onto the pier. Corbin was speechless, like most of the crowd. It was a very surreal experience to see the giant Tesla coils shooting out bolts of electricity at Blaine. He was standing on his 20 foot perch raising his hands like a conductor of the perfect lightening storm. Blaine maintained his position for three days with no food. He received fluids through a tube and relieved himself with the aid of a catheter.

Corbin wasn’t sure what to think or say. He looked at me with this bewildered look in his eyes. I just kept reminding him that playing with electricity is extremely dangerous and even deadly. At the same time, I was trying to explain how Blaine was able to perform the stunt and not zap himself into the next life! It was beyond weird to see a man standing in the crosshairs of the Tesla coils and catching electrical bolts as if they were simply being tossed at him.