This morning in midtown Hugh Jackman took some time to discuss his new film Real Steel and his family with the ladies of Moms and the City.

In the intimate discussion with a small room of bloggers he talked about his children, work and how he managed to finish reading the script for the film by turning it into a bed time story for his 10-year-old. 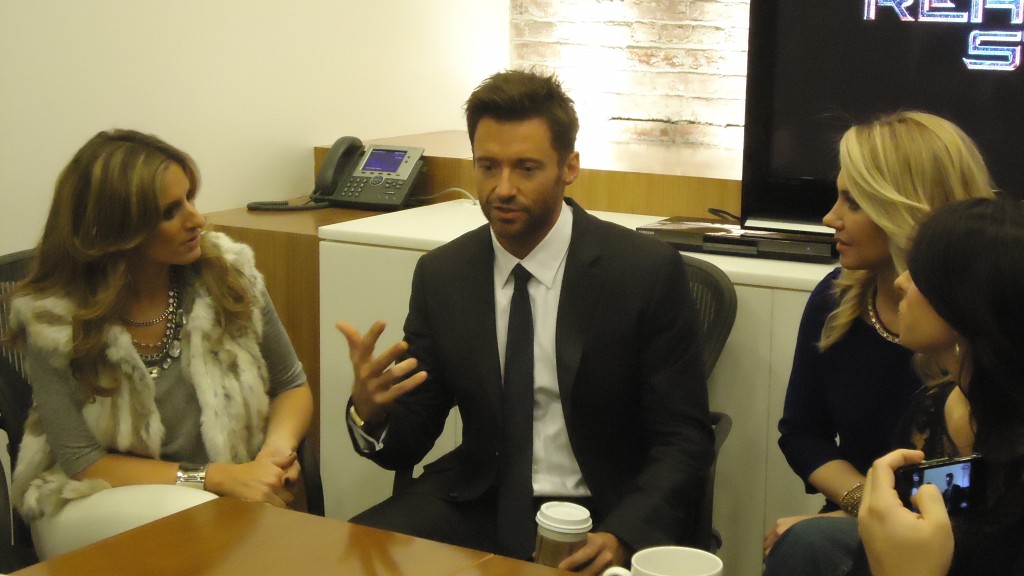 Hugh talking about his family

The once named Sexiest Man Alive talked openly about spending as much time with his kids as possible despite his and his wife’s busy schedules.  They are both actors.  But also admitted, as many parents know, it can be refreshing to have even one or two days away from the kids!  I, for one, am a big advocate of that!

Corbin won’t be seeing the film due to the PG-13 rating.  He’s only 6 and frankly, Finding Nemo still scares him a little.   Hugh said this is actually the first film of his that his kids have watched. Hugh didn’t think it was a good idea for his kids to see their Dad cutting heads off in X-Men while at the same time trying to get them to stop fighting with each other!  I agree with him on that one.

I hope to see the film soon.  If you check it out, let me know what you think.

We have officially said so long to summer.  At approximately 8:30 am Thursday morning, Corbin started 1st grade.  It is really hard for me to get my head wrapped around the fact that he is not in Kindergarten any longer.  I would prefer to keep him sweet, young and innocent for as long as I possibly can!

He has already started using words like annoying with perfect placement in a sentence.  ”Mom, you are so annoy-ying.”  That is pronounced with two y sounds, too!  I realized that part of his sweetness is being chipped away at when he uses these big words that he picks up from older kids!! Oh, well!  What do you do?  Put them in the closet until they turn 18?  Think I’d get in trouble for that?  Probably so. And besides, one of the many joys of being a parent is watching your child grow up, right?  It’s what we have to do as parents.  Let them grow, nurture them along the way to the best of our abilities and pray they don’t turn out like Marilyn Manson!

So here he is in all of his first day of 1st grade splendor.

I love him dearly, mo-hawk and all.