The heat of summer has forced many New Yorkers to cooler places. Lots of folks head to Long Island and the Hamptons to enjoy the sandy beaches and summer breezes. However, we ditched the east coast for the west coast and headed to Vancouver and the outer islands for a Canadian wild life adventure.

What was billed as a once in a lifetime trip, turned out to be just that. We left Vancouver on a float plane and landed at Poet’s Cove on Pender Island which was where we spent the first half of the trip. Within a few hours we were out on the water checking out a pod of orcas a.k.a. killer whales. Spotting the pod took a while and was part of a nauseating and cold ride through choppy water. 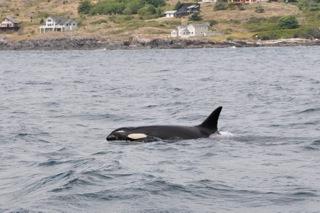 Corbin, Mark and I spent the next few days on the water searching for seals, whales, bald eagles and bears. With a guide leading the way, we headed out in sea kayaks for a day of geo-caching. I’d never been on a geo-caching excursion. If you’ve never done it, I highly recommend it. You use a GPS device to find a hidden treasure box. When you find the box, you can take a small treasure for yourself out of the box but only if you leave one for the next person who will find the box.

On that particular day, we were joined by a seal and her seal pup. We spotted several bald eagles, too. I’m not sure about you, but I’ve only seen one other bald eagle in the wild. For me, to see at least six in eight days was simply awesome. We even checked out an eagles nest. Did you know that an eagle’s next can weigh up to two thousand pounds? That tidbit of bird trivia may come in handy if you ever find yourself on an episode of Jeopardy!

We flew on to Tofino for more whale, bear and eagle watching. Our bear watching excursion was a bit of a bust. The most we saw of a black bear was his back side as he walked back into the woods as we pulled up in our Zodiak (fancy float boat). Corbin laughs when he tells his friends he saw a bear butt. There is nothing like 7-year-old boy humor!

Did you know you can surf in Canada? I did not. Turns out you can indeed surf. We stayed at Long Beach Lodge where the waves were perfect for the novice surfer. We headed out with our instructor after getting into a wet suit. Keep in mind it was about 65-70 degrees and he water was much cooler. I don’t see myself chasing down any huge waves in the near future but it was a fun experience none the less. Corbin and Mark really enjoyed it.

No trip to the western coast of Canada would be complete without salmon fishing. Mark snagged several salmon that should be heading back to New York City very soon. It looks like we will be eating salmon for the coming months. We also saw several humpback whales on our fishing trip. A sea otter even popped up out of the water to check us out, too.

If you find yourself wanting to escape the scorching heat of the summer, I highly recommend heading north…way north! The Canadian weather was perfect and the people were friendly. It is a great place to unwind and relax with your family. The only bad part was returning to the heat of New York City.

Tripp Edwards was kind enough to share some of his photos with me. Due to a strict 25 pound bag limit, I left my nice Canon camera behind in New York City. There was really no decision to be made when it came down to either taking a camera or bottles upon bottles of lotions and potions and clothes.