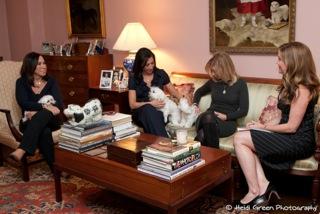 Shortly after our meeting, I received an e-mail asking me if I’d like to be thrown into the fire and take on an official assignment for the magazine. I said yes. Eric informed me that I would be interviewing the mom-daughters real estate team, the Kleier’s, from HGTV’s hit show “Selling New York.”

The date was set for the interview at -mom- Michele’s Park Avenue apartment and I began my research on her and her two daughters, Sabrina and Samantha. I watched numerous episodes of the show to see how they worked as a team. You can call watching TV for “research purposes” work, but it really felt indulgent to me. Either way, I liked it!

The Kleiers were very easy to talk to, and an hour went by in what seemed like only a few minutes. I checked my recording device, said my goodbyes and headed back across the park to my apartment. In my old job as a television journalist, I would have taken my tape, hit the edit bay back at the station and started logging in sound bites from the interview. However, this time around there was no video and I had an hour long conversation to listen to and sort out. I also had more than three minutes to tell the story like I would have had for a television piece. This time I had between 1,000 and 1,200 words to write and a deadline in five days.

I’m thrilled to report that the story has been published in the June issue of New York Family magazine. I am really happy to be back in the world of journalism again. I have missed it – parts of it at least. I have not missed the crazy hours at a TV station, covering tragic stories like a school massacre or reporting on city and county government. That last category falls under watching paint dry!

If you’d like to read the article, you can find it HERE.

For more of DJ’s adventure in the Big Apple check out djduckworthyoga.com/blog, follow her on Twitter @mrsdjduckworth and on Facebook. DJ’s stories can also be found at newyorkfamily.com.