My recent trip to Paris was no exception. My Aussie friend Jackie Brown gave me a fabulous idea. When she went to Rhode Island, she set out on a quest to find the best clam chowder. The Black Pearl in Newport won out. (I’ve had their clam chowder numerous times and I’d have to agree.) She challenged me to do the same—find the best…something…in all of Paris. My first thought was to set out to find the best flute of champagne!! About two seconds later I decided my son didn’t need to be trotting around Paris with his Mom half lit from the bubbly.

Then I thought about the macaron. If you aren’t familiar with a macaron, it is a perfectly sized, meringue- and almond-based cookie sandwich, simultaneously light and chewy, filled with delicious flavors—everything from raspberry to caramel to green tea. As an Oreo addict, I like to think of a macaron as the Oreo’s upscale, cultured French relative. 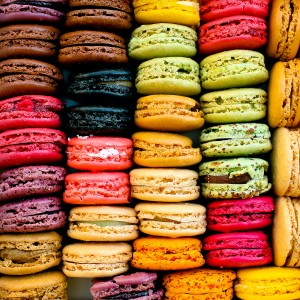 So off I went, across the Atlantic, with nearly 50 pounds of luggage and my one and only son in tow, in search of the perfect macaron. Within two minutes of landing at Charles De Gaulle, Corbin and I had a sighting—a delectable little macaron beckoning to us from airport’s Ladurée counter. But tempted as we were, first things first—we needed to get to the hotel to decompress from the long flight.

But we didn’t have to wait much longer—walking into our beautiful apartment at the Hotel Raphael, we spied a full spread of treats, including a bucket of chilled champagne, a lovely note from Norbert, the hotel manager, and our first macaron contender. Our quest began.  Strawberry, bite-sized, delicious—the macarons were the perfect welcome to the City of Lights – or the “City of Love,” as Corbin insisted on correcting me about daily!

Diamonds in the Rough

After some sleep and a hot shower, we set out along the Champs Elysees and bought more “classy Oreos”. They came from, of all places, the Publicis Grocery store around the corner, nowhere near as fancy as the Raphael. And they were fantastic! Simple and delicious, they hit the spot.

Temple of the Macaron

For our second macaron stop, we made a pilgrimage to the temple of macarons— Ladurée, the esteemed French bakery and inventors of the macaron as we know it. When we arrived, the line out the door let us know we were in for some serious yumminess. There were two lines – one to sit and eat and a second line to just walk in and buy a box of macarons. After lunch, we munched on the Strawberry, Raspberry, salted caramel, and rose. Corbin devoured two after committing to share them all with me and then reneging once the waiter put them on the table. Of course, they were divine–though the rose macaron was a bit weird to eat. While I love the smell of roses, the taste of rose really threw my senses off. Don’t get me wrong, it was really good. But I wasn’t compelled to order another rose macaron anytime soon. I just like to smell a rose and not taste a rose. 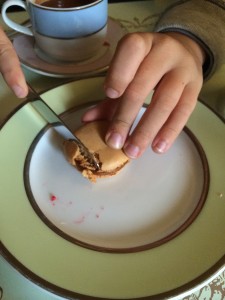 Our third macaron sample came from Ramella, a little shop in the Marais, one afternoon before we set off on a picnic in a nearby park. We went straight for our favorite flavors strawberry and raspberry. These were good, but I wasn’t blown away. The workmanship was not nearly as neat as the previous two competitors. If you find yourself in the area, though, I highly recommend you pop in and put together some things for a picnic lunch. It was scrumptious, though, I admit, a bit lost on me. By this time in the trip I was over fancy French food and was really craving a quinoa and spinach salad. 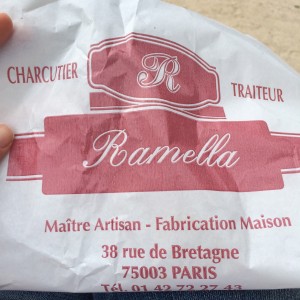 This is all that was left!

We made our fourth and final macaron purchase at an amazing store called Dalloyau. Corbin and I spied the store as we were walking out of the Jardin de Luxembourg after sailing boats. 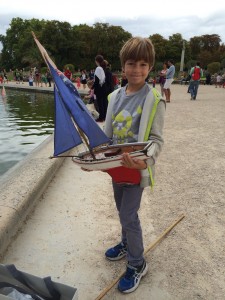 I’d been encouraged to try a macaron “store” near Jardin de Luxembourg—was this the place? The store was immaculate. The display counters were simply beautiful. I bought one of everything. Corbin yelled at me from across the store, interrupting my impulse-buying spree. He had found the macarons. We bought four and headed out to find a taxi, just as it started to rain. 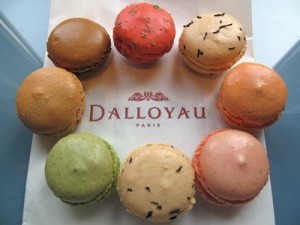 As soon as I bit into the first salted caramel macaron, I knew I’d possibly found the best macaron in Paris. This one had the right amount of firmness and just the perfect amount of soft, sweet filling. It was crafted with the kind of precision that would make an Army sergeant proud. These perfect specimens were so pretty to look at and admire that I almost didn’t want to eat them. 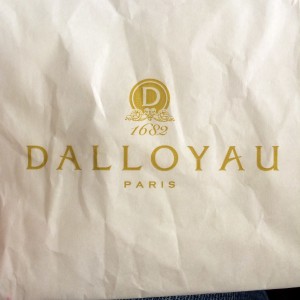 So where is the best macaroon in Paris? Drum roll, please! I have to give the crown to Dalloyau. From the taste, texture and presentation, they swept the competition. And guess what? I found out later that Dalloyau was actually NOT the store my friend recommended after all—that was a place called Pierre Herme! I guess this means I’ll have to make a return trip, right?

Despite crowning Dalloyau the winner, my advice is this: Next time you’re in Paris, stop and buy macarons whenever you see them! They’re like gelato in Italy – it’s all good! You can’t go wrong. My only caveat? Remember that the calorie exchange rate is exactly the same in Paris as it is in New York City. So leave your skinny jeans at home!

And anyway, half the fun is in the hunting—the time I spent with Corbin taste-testing macarons is what I will treasure long after the cookies are gone.