I’ve lived in New York City for years, but I have a confession to make—I have never visited the Statue of Liberty. Or Ellis Island. Not because I don’t appreciate their significance to New York City and America.  But because I have a real dislike for being part of aa sea of tourists.  But now that’s changed, in a big way. After seeing them both on the Exclusive Resorts Kids Take Manhattan Event, I’m glad I waited.

On this special Event, we had after-hours access to the Statue of Liberty. We saw Lady Liberty as she’s meant to be seen—without long lines or masses of tourists trying to snap photos. She was impressive close-up. And the only screaming kids were with us! They were thrilled to have room to run to get to the Statue before the rest us. Corbin and I wanted a little background, so we followed our park guide around to the base of the statue for a full rundown. 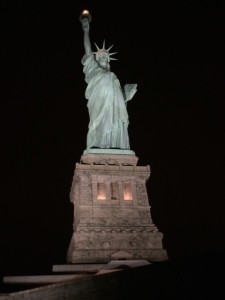 Statue of Liberty after Dark

The guide told us that if we wanted to check out the view from her crown, to come back in January or February! Of course, I’d nearly freeze to death getting there, but the crowds are slim and the view is spectacular. Sounds tempting…except the freezing part. We’ll see!

After our Statue tour (and the requisite trip through the gift shop), we boarded a private ferry toEllis Island. We walked into the main building and into the Registry Room, also known as the Great Hall. It was definitely great, in every sense. The room is awe-inspiring, and had a kid-friendly sit down dinner with the other ER members and their children. Corbin had a blast chatting it up with two boys from Toronto and another one from Alabama. 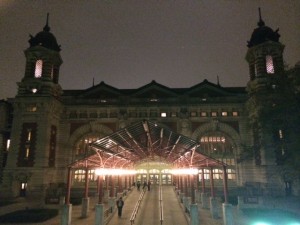 The team of park guides took the kids off to talk with them about their own ancestory. The big kids (adults) hung back with our own guide, who gave us the history of Ellis Island and clarified some of the common day myths – for instance, there was not a book that immigrants signed at Ellis Island that led to names being shortened or changed all together! We all reconvened for a little dessert! Corbin and the boys took off, running, hiding, and playing among the massive beams in the Great Hall until we boarded the ferry for our return trip.

How do you even describe a sleepover at famous toy store FAO Schwarz? Three letters—OMG! Corbin still hasn’t stopped talking about it! He was over-the-moon excited when we showed up. Within in seconds, he was off with the other kids and I left them to their “business”. I’ve heard bits and pieces of how the night unfolded, but I can tell you this: He was up until 2 a.m. and was pretty bleary-eyed when I showed up at 8 a.m. I’ve heard about hide and seek, playing on the renowned giant floor piano, and the candy. Literally buckets of sugary candy. Clearly a recipe for a successful night. 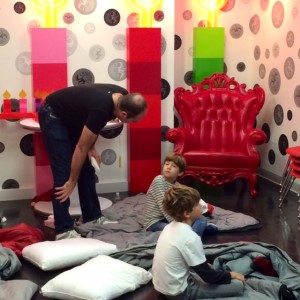 Our last outing was to see the Tony-winning Broadway show Matilda. Despite the great seats, Corbin wasn’t so sure about this one. But once it started and he realized there were really a lot of boys in the cast, he got into it—his lack of sleep the night before got the better of him. He fell asleep during the second act. Fortunately, despite his cat nap, he managed to see and hear some of my favorite scenes in the show. 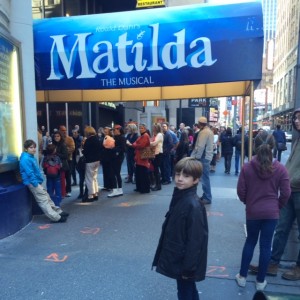 Corbin before Matilda and his mid-show nap!

We’ve since downloaded a few of the tunes, too. Corbin is a big fan of Roald Dahl, so he’s checking out the original book. He’s currently halfway through—which makes me infinitely happy. Any Event that leads to more reading is okay by me! 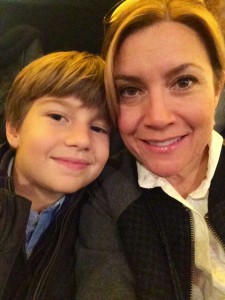