I celebrated my birthday on Tuesday in the Caribbean aboard The World.  It was a perfectly fabulous day as far as birthdays go. I woke up without the aid of an alarm, worked out, enjoyed a massage at the spa, had some fabulous lunch and read a book poolside as I sipped on a margarita.  The day was stellar on just about every level.

On the eve of my birthday it came to my attention that I’m a rule follower for the most part.  I always have been for whatever reason.  Probably because my older brother Wally was always NOT following the rules and creating all kinds of problems for everyone when we were growing up in Carlisle.  Even today, I’m usually the one following the rules, listening and doing as I’m told. 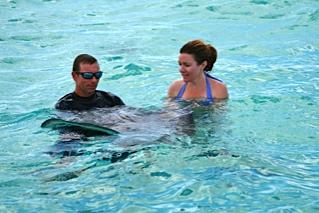 In what I can only describe as one of the best gifts I have ever received, I gave myself this.  Permission to not be such a stickler for rules any more.  Of course, I’m not talking about the big ones but rather some of the smaller things.  Basically I’ve decided to cut myself some slack and make my own rules and stop living by someone else’s rules.  You following me?

On Monday, I dove right into my new gift of ‘breaking some rules’ as I swam with the sting rays in the North Sound of Grand Cayman.  There isn’t any official rule stating you cannot swim with sting rays that I am aware of.  It is, however, advisable not to do such a stupid thing!  After all, they are wild animals.  I’ve been to Cayman twice before and wouldn’t even entertain the thought of jumping in the water.  This time around, I decided, “What the heck?”  But, only after Mark got in the shallow water and fed the sting rays himself.  I may have decided to break a few rules, but I didn’t say I’d also given up being smart about the timing of breaking them!

I tapped into my yoga breathing, tried to relax and just hang with the rays.  It was a fabulous experience.  Our guide, Paul, rounded up a ray for me and explained how to keep her in my arms. It worked!  I have included the photo to prove it.

These floating creatures are nothing more than graceful moving pieces of cartilage that feel a bit like a Portabello mushroom.  We even found some small babies in the mix as we indulged them with squid.  Which begged the question from the ever curious journalist in my brain, “If these are babies, how can we be sure they are tame enough to play this game with us?”  The answer – we weren’t sure and luckily we enjoyed the experience without ending up in the headlines.  Can’t you see it? New York City Tourist Killed By Ray – What A Dumb A** She Was!

Mission accomplished.  I broke a rule or maybe just decided to freaking live a little and stop being so concerned about all of the details.  I decided to be open minded and not attached to my preconceived ideas about the situation I was in at the moment.  There is a saying … have a mind that is open and attached to nothing.  Sounds easy enough, right?  It is not! Keep this in mind when you argue with your spouse, when you are trying to calm down a child and even attempting to listen to someone with different political views than yours.  My mind is already in a retreat mode just contemplating a discussion with a Sarah Palin!

As I start another year on this planet, I’m going to work on keeping an open mind and a couple of other things:

1.   Cut my self some slack.  Break some rules, discard the ones that no longer serve me, make my own and at times break those, too.

2.   Let go of ideas, things, people and situations that no longer serve me.

3.    Spend more time with my friends both old and new, especially those who allow me to be who I am and love me regardless of what I might say or do.  They know I am only sharing with them what I’d like to receive in return – a simplistic human connection.  Pure and simple.

You can keep up with DJ’s adventures in the Big Apple by following her on Twitter @mrsdjduckworth and on Facebook.  Find more atwww.djduckworthyoga.com/blog. DJ is a contributing writer for New York Family.  She lives in New York City with her three boys – Mark, Corbin and Leo – woof, woof!