A friend recommended we check out the Saturday Warm Up series at MOMA PS1 in Long Island City.  It came highly recommended and after checking it out on-line, I decided it would be a fun thing for the three of us to try out on a Saturday.

I snagged the tickets on-line and we took the 7 train over to the museum.  I knew immediately that something was off when we walked up to the museum.  First of all, there were no kids in sight.  Well, not “no kids” but just three that I saw as we stood in the line that snaked around the museum.  As we inched closer, Mark took a peek inside the courtyard where the event was taking place.  When he turned around and looked at me, I knew something was up.  With a laugh, he said, “I think this is a rave”!

No way, my friend would never suggest I take Corbin to something that wasn’t age appropriate.  We made our way in, passed the security check point where we were “tagged and stamped” and proceeded into the courtyard.

It wasn’t so bad actually.  The music was great!  But within in a few minutes, it hit me.  The smell of marijuana.  Uh oh, maybe we were at a rave?  A more high brow, artsy, well curated rave.  Oh shit!  We made it into the museum with enough time to scope things out before the galleries closed.  I had to rush Corbin though an exhibit with dead animals hanging from a tree and into the room where Ansel Adams was on display.  Hurray for American photography! 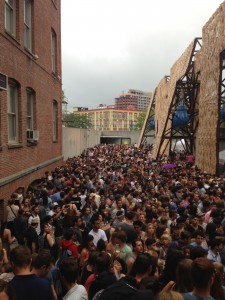 See the exit all the way down there?

As a parent, I’ve gone to insane lengths to keep Corbin away from inappropriate video games, tv shows, people, relatives, food, situations, etc. And yet, here we were, smack dab in the middle of a full on dance party with alcohol and the occasional joint being passed around!  “No son, you can’t eat at McDonald’s, but I’ll take you to a beer and pot infested dance party!”  Yes, you should be laughing out loud now because I am STILL laughing even as I type this!!! Corbin was intrigued with the art and loved the music.  He was not thrilled the the size of the crowd!  Or the smelly homeless man on the subway ride back to Manhattan. “Mom, I think that man pooped in his pants.  He smells awful”, Corbin said.  I think that is exactly what the situation was with the homeless man.

Check out the photos that I managed to snap in between keeping a death grip on Corbin and trying to make my way out of the sea of cool, young, hip, slightly inebriated, urban people. 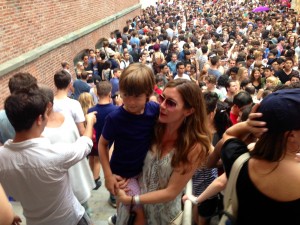 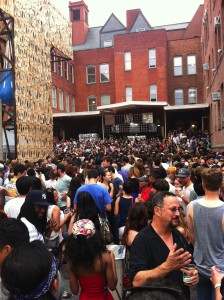 Yoga is part of my life and has been for many years.  One of my favorite aspects of the practice is the music.  I like to listen to music that is more instrumental and without lyrics preferring Krishna Das over Katy Perry.  If I start to sing along, my brain takes me back to where I was when I heard the song, who I was with, what we were doing, what I was wearing, what I was eating, how old I was, who my friends were, who I didn’t like, which boyfriend broke my heart, how much I weighed, what my hair looked like…you get my drift?  I get lost in my thoughts and forget about the practice.  Which is why I don’t like to hear anything remotely contemporary in a yoga class.

On Wednesday, I was half way through an intense yoga class with a teacher who plays a wide variety of music in his class.  You can image my surprise when I heard the words mother fucker float or rather sear through the room!  I was really into a groove with my practice, moving well, sweating like crazy and finally in my yoga zone.  And all of a sudden, there they were.  Mother fucker.  Of course, it didn’t take long for me to snap out of my yoga zone. 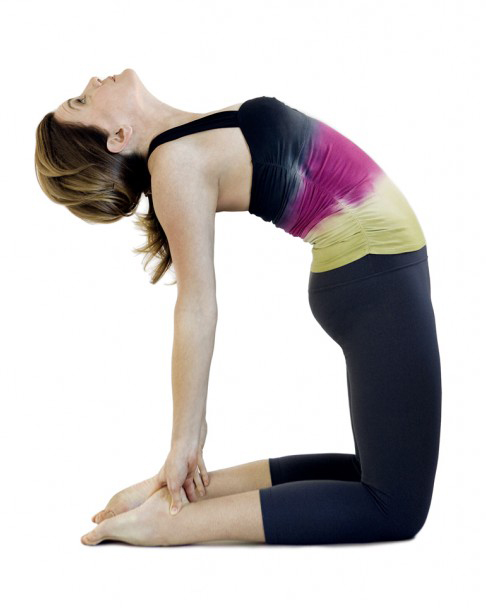 Getting into my Yoga Zone

I looked at the other yogis in the room to see if they were as shocked as I was.  Some were.  The teacher didn’t appear to be too rattled that the song was playing as I assumed he wasn’t aware that it was in the playlist.  Needless to say, my practice took a different turn at least mentally.

And then I started giggling.  Really?  Not only was I bombarded with mofo’s, but now I
was giggling like a school girl.  The song finally ended – THANK GOD!  And my giggles subsided and I managed to finish the class.  Sivasana was as pleasant as it could be as Adele’s version of  ”I Can’t Make You Love Me” played in the room.  And there again, I was back in my head thinking about the first time I heard that song and how sad it makes me feel. I thought,  well isn’t this just a mother fucking perfect way to end my mother fucking yoga class?

Namaste’ my friends.  May all of your yoga experiences be free of all mother fuckers.