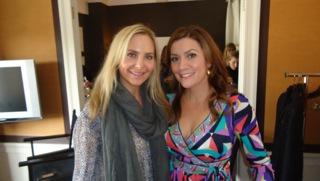 I’ve always been a fan of cosmetics. When I was a little girl, I was always pilfering through my Mom’s makeup drawer. I was captivated by the sleek tubes of lip stick and the pans of blush and powder. As I grew up, I became pretty good at make-up application, too. Between all of the baton twirling, pageants and later on, an on-camera television career, makeup became a big part of my daily routine.

Recently, I had the opportunity to spend some time with Carmindy. Many of you may know her from her time spent on TLC’s “What Not To Wear.” Each week, she helps transform a fashion victim with her expert advice on looking your best.

Over the two days I spent in her chair, she taught me some of her best tricks. My favorite tip and one I use almost daily is to highlight around the lip. Carmindy showed me by using a highlighting eye shadow, you can outline the lip. This technique works much better than a lip liner and gives you the appearance of a fuller lip. She also uses the same highlighting technique in the corner of each eye and right underneath the brow line. This really makes the eyes shine. And to finish off the look, she dusts a little highlighter right along the top of the cheek bone. It gives you a subtle shine with a huge impact. 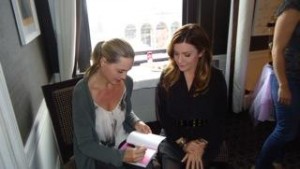 I have been blessed with what I think are fairly long eye lashes, and with the correct mascara, I can usually create a full lash line. Carmindy showed me how to amp-up my lashes with the use of false eyelashes. She took a full lash and cut about a third of it off and placed it on the outer edge of my upper lash. It added some fullness without making me look like a Kardashian!

Carmindy has teamed up with Sally Hansen and created a line of cosmetics. I’m not a huge fan of drug store, but I have to say, I’ve been wearing her blush, power and eye shadows and have been pleased. My favorite product thought is her lip gloss. It stays on really well and smells like a creamcicle!