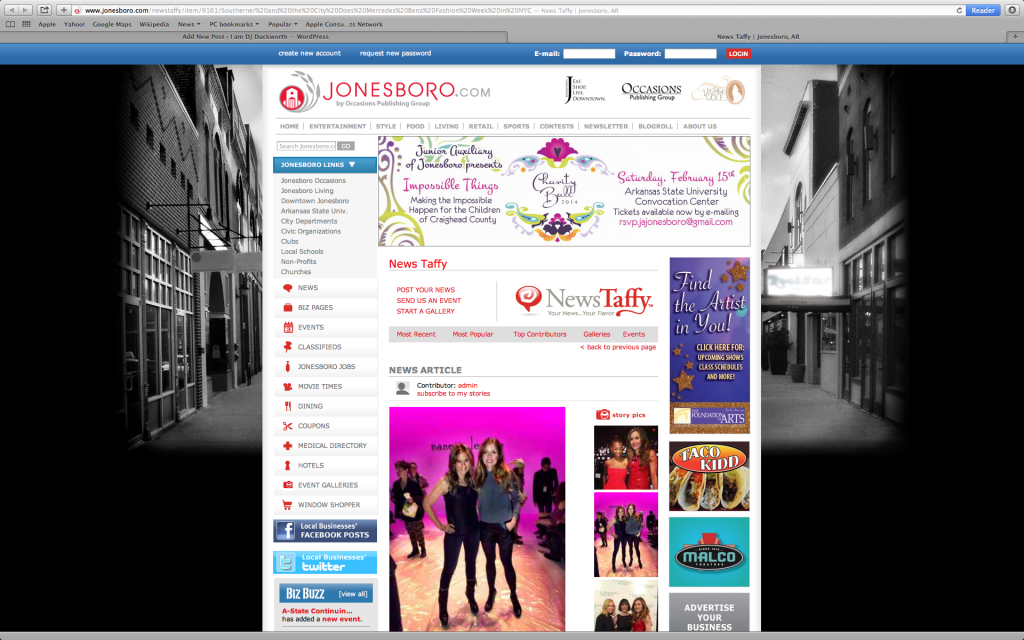 In case you aren’t following me here, check out my piece about Mercedes Benz Fashion Week. It is always fun to check out the fashion shows when I can score a ticket! 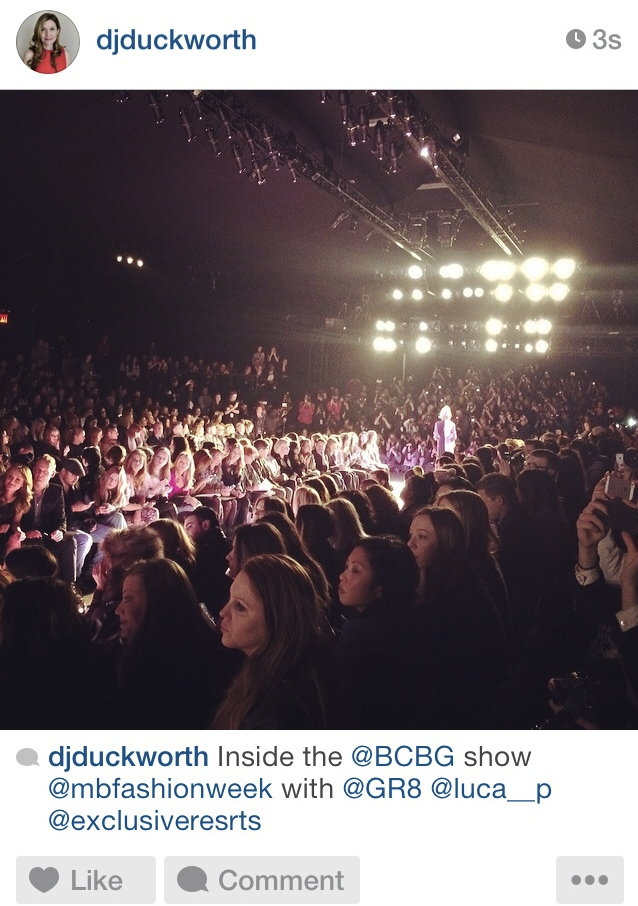 Mercedes Benz Fashion Week in New York City is underway despite the nasty weather hitting the city as I sit here and write this post!  I was looking super fashionable yesterday decked out in Maje leather shorts, a Haute Hippie sweater, Proenza Schouler jacket – that I bought under the expert eye of Jonesboro’s Jonathan Parkey and my Khirma Eliazov bag. 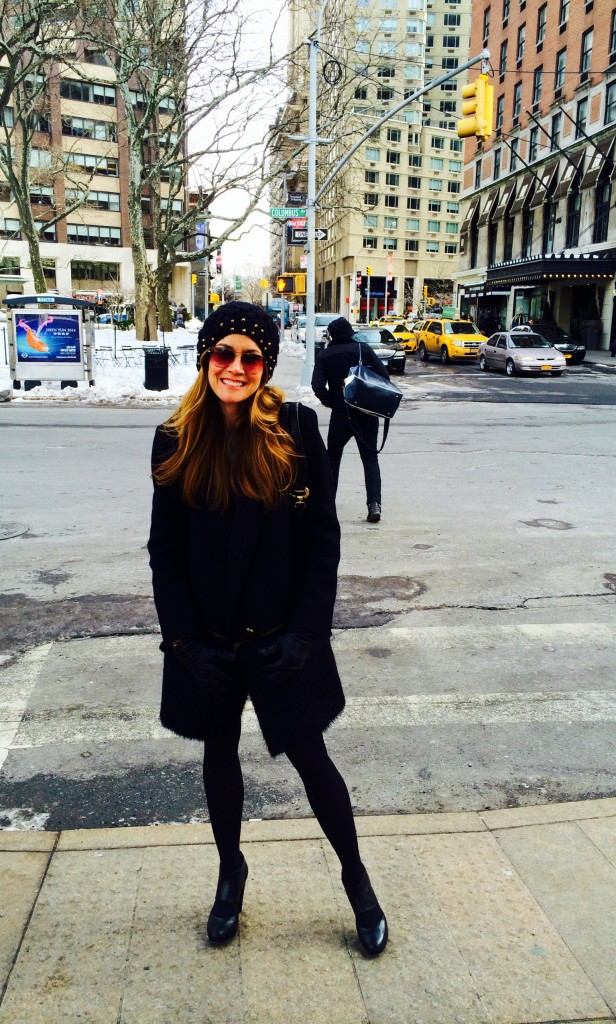 Today, I’m kicking it in jeans, a sweatshirt, a scarf, wool socks and my Ugg house slipper – sans any make-up.   It’s freezing cold and a Nor’Easter just blew through the city. I do have an improv class to make so I’m going to be FORCED to leave the apartment.

Scoring a ticket to a fashion show is a tricky endeavor.  I’ve been to several shows with friends who work in the fashion industry.  I’ve also been as a guest with Exclusive Resorts.  ER offers some amazing “experiences” in addition to their homes in the travel club portfolio.  Think Super Bowl, Kentucky Derby, Wimbeldon, heli-hiking in Canada and the Food and Wine festival in Aspen…just to name a few.

This week me and my girlfriends, Victoria and Alona, were guests at the BCBG show.  Our host from Miami’s GR8 Group, Luca Pavanelli, made sure we were well taken care of for the show.  As the shows go, it’s never really about the clothes.  It’s really about the people celebrities in the front row. 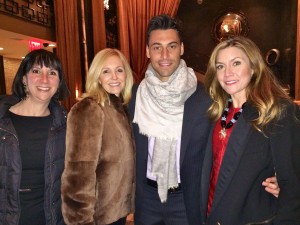 Food Network star Giada de Laurentis was in the crowd.  She was very gracious and stopped to take a photo with me. 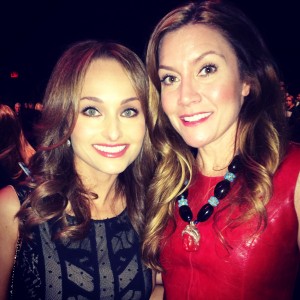 On the runway with Giada de Laurentis

As was Orange is the New Blacks Samira Wiley.  Samira plays a tough inmate on the Netflix series.  But she totally rocked the orange strapless jumpsuit for the show. 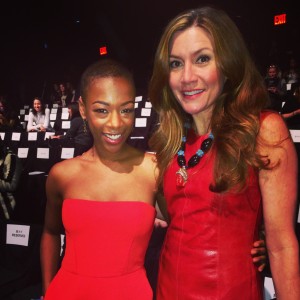 Yesterday, my friend Denise Albert and I took in the Nanette Lepore runway show. I have been a huge fan of Nanette Lepore for many years.  Her clothes fit like a dream, are feminine without being prissy – I will never be described as prissy- and are made in the U.S.A. 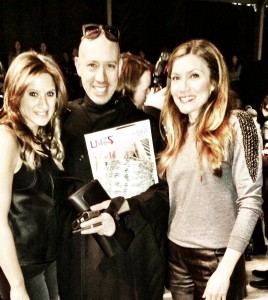 Robert Verdi at Nanette Lepore- stylist to the stars

Again it was all about the front row and who was there.  Edie Falco from Nurse Jackie, Cat Greenleef from Talk Stoop, Kelly Rutherford from Gossip Girl, Peyton List, Condola Rashad and mega watt stylist June Ambrose held down the front row! 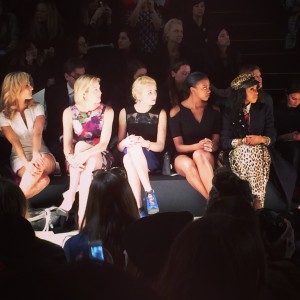 The collection was beautiful!  I must say the Fall and Winter collections are by far more interesting than Spring and Summer. With the deep colors, decadent fabrics and lux furs, the clothes are always inspiring.  Especially when it’s 14 degrees outside and you are wearing leather shorts!  Hey, I took one for the fashion team!  I don’t do those leg work outs for nothing!

Keep up with DJ and her travels by following her on Twitter @mrsdjduckworth and on Facebook at I Am DJ Duckworth.  She posts some amazing travel photos and some seriously mundane self indulgent selfies on Instagram, but isn’t that what Instagram is about?