New York Fashion week as come and gone.  However, some of the world’s leading fashion designers are still unveiling their collections in Milan, Italy this week. I hope to be in Milan in September, but for now I’m still marinating in the excitement and insanity of the Carolina Herrera show I attended during fashion week here in New York City.

Last February I participated in the festivities and fun of fashion week.  With Exclusive Resorts’ Andy Irving and Sage Fennig, I had access to the tents and some amazing shows.  Andy and his team planned four jam packed days of fashion shows, shopping, eating, drinking and of course people watching!  This year ER took their show on the road and is in Milan, as I type this post, taking in Prada, Gucci and well, you know, all of those other amazing Italian brands that make you think about taking out a second mortgage on your home! Hopefully Andy and Sage will share their photos and stories with me when they return.

This year I had access to some of the most sought after shows.  However, the ticket prices … yes you can buy a ticket to a fashion show … were astronomical.  For example, a ticket to the Carolina Herrera show which I really wanted to see was almost $2,000.  And no, that did not include any clothes!  I decided I’d pass on the ticket and check out the collection online for a lot less. 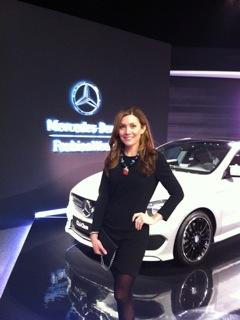 But my dream of seeing the show actually came true!  My friend Mayte ended up with tickets to the show.  Much to my shock and amazement, we had seats on the front row in the middle of the runway.  We could not have been any closer to the action.  And, we were seated next to New York Times fashion photographer and legend, Bill Cunningham.

Like last year, the best part of fashion week and the show is the people watching.  Carolina Herrera is a huge fashion brand with an A-list following of celebrities, fashion editors and stylists.  The show did not disappoint in the people watching department.  Molly Sims, Ivanka Trump, Brad Goreski and Tinsley Mortimer sat behind us.  While Anna Wintour, decked out in her perfect scowl and sunnies, along with the raven haired Grace Coddington sat further down the runway.

“It Girl” Karlie Kloss wore the first look of the show.  The dresses where what you would  expect from Herrera.  The were seriously feminine, flattering to a woman’s body with amazing tailoring and made of the most luxurious fabric.  My favorites included a long red dress and a black two piece ensemble with a sequined hooded top.  Simple and stunning.  The collection’s long emerald green dress trimmed in fur would make any Hollywood It Girl swoon.  The waist cinching belts and perfectly placed brooches were also a great touch from Herrera.  You can see the entire collection atwww.style.com.

If you are a fan of Bill Cunningham’s fashion coverage in the New York Times, then you should also check out Reuben Harley or Big Rube as he likes to be called, from the Philadelphia Daily News  He sat down next to me after the show while I was checking e-mails and returning phone calls.  We started chatting, he asked me about my Wolford stockings, by their EXACT name, and I knew he wasn’t just any photographer! Big Rube and I hit it off immediately.  And we even found a common Southern connection.  He has  an ease and grace about him that doesn’t lend itself to the frantic pace of the fashion world.  But he clearly has an eye for capturing the essence of a woman and all things fashion related. You can find more of his work atwww.streetgazing.com.

In an attempt to capture a photo of me and the Mercedes-Benz Fashion Week logo, I ended up looking like a sales person for Mercedes-Benz don’t you think!  Oh, well!  I’ve included it in the mix of photos from the day.

You can keep up with all of DJ’s adventures in the Big Apple by following her on Twitter @mrsdjduckworth and on Facebook at DJ Cunningham Duckworth. DJ is a contributing writer for New York Family magazine. She lives in Manhattan with her three boys; Mark, Corbin and Leo – woof, woof