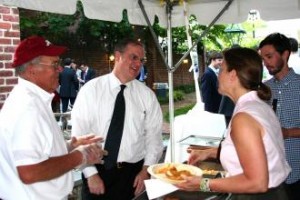 Southerner and the City on Catfish and Politics

I grew up eating my fair share of catfish. Whether it was at a back yard fish fry, at Nick’s in Carlisle or Murry’s in Hazen, I could always count on eating really good fried catfish at any of those places. After eating some of the best southern caviar as I like to call it, I’ve basically decided that I don’t need to eat this delicacy anywhere north of I-40 in Arkansas. Why, you ask? I’ve found it to be a waste of calories and money! Most people just don’t know how to properly cook the stuff.

I made an exception recently on a trip down to Washington, D.C. when Carter Harrison headed to the Capitol to cook for the Catfish Farmer’s of America. Since 1985, Harrison has made a yearly trip to DC cooking for various groups, including senators and congressmen. Hailing from Prairie County, Harrison is the man behind King Kat, which is one of our nations premier mobile catfish catering businesses. My Dad tagged along for the trip as Harrison’s right hand man which made the occasion even more special for me – my Dad and catfish.

With all of Arkansas’ political delegation in attendance, the crowd dined on catfish as they discussed the topic of the evening…catfish inspections. And without going into my old investigative journalist mode here, I’ll just say this. At issue is the government’s inspection of imported catfish. American catfish farmers want the USDA to inspect the imports, while the government is leaning toward having the FDA inspect the fish. The USDA inspects a larger percentage of fish than the FDA. The imported fish is also not held to the same standards as American raised catfish. So, without a more in depth inspection, American catfish farmers claim that the imported fish may raised using banned drugs and chemicals and may in fact not even be catfish at all. The USDA inspections, outlined in the 2008 Farm Bill, have yet to be implemented and may be heading for the chopping block.

As a consumer, we have to arm ourselves with all of the information we can about where our food is being raised and what chemicals are being used on it. Does your fish come from China or a pond in Mississippi? I’ve found it’s best to know the difference between farm raised and wild caught fish. And now, I’ll be asking if the catfish is American raised or imported!

Keep up with DJ’s adventures by following her on Twitter @mrsdjduckworth and on Facebook. Check out www.iamdjduckworth.com for more. DJ is a contributing writer for New York Family magazine. She lives in Manhattan with her two boys and the world’s most amazing wiener dog, Leo!